In 2015 I coordinated my first trip with popular tattoo artists outside the US for Reese Hilburn, Clint Cummings, Steven Tefft and Gentle Jay. I realized they had a HUGE fan base from TV shows Ink Master and Tattoo Nightmares Miami in South America. We set off to attend the Mandinga Tattoo Convention in Buenos Aires, Argentina located in the Palermo Soho area.

Our arrival to Palermo

After a 10+hour overnight flight we all arrived a bit hung over and very tired. We were shuttled almost an hour away from the airport to our hotel Esplendor Palermo Soho . This is a fantastic, clean hotel, with on street balconies, an easy walk to many bars and restaurants plus down the street from the tattoo convention which we were there to attend. That evening we were treated to a traditional Asado (BBQ) dinner at El Corralon  This is where we all tried our first blood sausage and tripe (beef intestines) and thankfully some of the best steak I have ever experienced! Argentina is famous for its high-quality grass-fed beef. The country boasts more cattle than humans within its borders, and it’s the third-largest consumer of beef per capita.

Day 2 we had a private tour of the Galleria Bond Street . This is an awesome alternative, graffiti style, mall setting that contains skateboard swag, tattoo studios and all types of art and retro memorabilia for sale.  After Bond Street we bused to La Bocca where Clint decided to try the Tango. I was just sitting with him drinking wine and the next thing he was striking this pose. I’m so happy I captured the moment. Tango is performed in the streets of La Boca while you sip wine and watch. Proper Buenos Aires society considers tango an indecent entertainment associated with violence, illicit sex, and the lower classes.

After a full day touring downtown Buenos Aires Capital, we continued to bar hop all around Plazoleta Julio Cortazar where we ate Pizza with green olives, more steak plus plenty of beer and wine! We then met up with our new friend Flor who brought us to Frank’s a Speak Easy  We sampled some incredible mixology cocktails and enjoyed the unique environment while trying to speak and understand Spanish. I blame Frank for what came next .. Sometimes when traveling with tattoo artists the evening can end at a strip club. This trip did not fail! What was unique is the club had male and female dancers! No pictures .. no more words needed.
If you were there.. you know and remember.

Finally it’s convention day and we walk less than a mile to La Rural Convention Center to attend the 10th anniversary of Mandinga Tattoo Show. We had NO IDEA what to expect from the fans. Thank god for the amazing security from Mandinga because Steve, Reese, Jay and Clint were the visitors favorites at the show.  To give you a visual, this meant the fans stood 10 people deep completely surrounding our booth!  One person from my group said.. “now I know what it’s like to be in a Boy Band” as security shuffled us through the crowd. Click to see video here.   I’m often so impressed with my clients. On this trip they spent hours tattooing, taking photos, signing autographs and kissing tons of people each Friday, Saturday and Sunday  Never a complaint. And it was HOT!

After a long few days at the extremely busy convention we all woke up early to go to TruTV studios to film Ink Master and Tattoo Nightmare’s Miami TV promo’s. To end this incredible trip we were treated to a private Argentinian BBQ at one of the oldest churches in Buenos Aires, currently used as a back drop for many TV shows and movies, yet boasts the Pope has stayed over night there.  We ate more beef, pork, chicken, chorizo, and morcilla which were cooked on a grill, called a parrilla, or an open fire. Soccer was played in the heat and the most epic group shot was taken just before we were shuttled to the airport.

Tattoos to Memorialize the Trip

Typically during our trips we all find a closer bond with each other because our travel experiences together.  Tattoos are often completed to memorialize the time we shared together. Pictured below is Steven Tefft’s Mandinga logo/icon. This trip was so successful that I’ve sent Tatu Baby and Jime Litewalk and Reese Hilburn again.  This first trip outside the US for the artists in attendance was an incredible journey where we now have life long friends in Buenos Aires. This also was the catapult for continuing to book travel for many artists all over the globe! Ck out more of my epic travel blog posts! 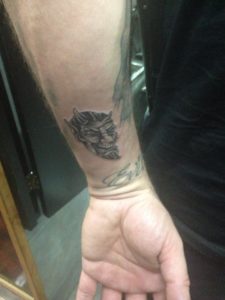