After a stunning 7 day stay in Switzerland for the Alchemy Tattoo Convention me, James Vaughn, Mark Longenecker and his wife Raelene set off from our London experience! We were flying to London to attend The Great British Tattoo Show  happening May 27 & 28, 2017 (Saturday and Sunday only) a great event hosted by UK’s popular tattoo magazine Skin Deep.

First things first .. MONEY exchange from the Euro € to the Pound £. The currency exchanged SUCKED! We lost almost the equivalent to $100+ USD. (travel tip – XE Currency App  is a great money exchange converter)

Our flight from Geneva to Heathrow London Airport took one hour and 45 minutes and it was cheap!

London Lodging – where to stay??

It’s overwhelming trying to find lodging in an unfamiliar city like London. There are so many different areas that appear safe and are walking distance to attractions. (I research crime in the areas too!) I also noticed that the traditional lodging (hotel) would cost us aprox. $200+ a night and was going to be significantly more expensive than splitting an AirBnB. If you are unaware, every country except the US charges additional lodging fees per head plus the room fee. After much research I found a large apartment centrally located in London with a full kitchen and 2 full baths. This area is considered “Central London” and our apartment was a few steps from Palace Theater which was playing Harry Potter Cursed Child.  If you want a good AirBnb experience in London, the Veeve Group manages a TON of properties in many areas of London, were great to work with and our place was pristine! (well with some crack heads on the streets below us but that’s another story)

Once we got settled, we set off to explore and get lost on the streets of London. We stopped into a few traditional pubs, grabbed pints of ale in these century-old public drinking houses with cascading flowers spilling off the awnings some dating back to 1700’s and haunted. Most people are standing with their beverages at high top tables spilling onto the streets. We found ourselves in Soho London stopping into Dog and Duck Pub who is said to have served John Constable (famous painter from 1700’s), George Orwell (novelist from 1950’s) and Madonna and it was packed!

The following day James Vaugn and I set out to Piccadilly Circus to jump on the Original tour bus of London. It was unseasonably warm and sunny, so we jumped on a red, double decker, open air bus. Our ticket also included a boat ride down the River Thames. When we visit a new city these tours are great and give you the ability to understand your surroundings to get around easier. We passed by: Houses of Parliament (rebuilt in 1016), Big Ben (construction started in 1843), Tower of London (built in 1078), London Eye, Westminster Abbey (opened in 1090), Piccadilly Circus (square founded in 1819), Buckingham Palace (constructed in 1703) etc.

The river tour took us by : Tower Bridge and London Bridge where we departed the boat to look around and catch the next bus back. Tower Bridge is a combined bascule and suspension bridge in London, built between 1886 and 1894. The bridge crosses the River Thames close to the Tower of London and has become an iconic symbol of London. It felt like we stepped back in time at the Tower of London.  The tower is heavily guarded and switched out every two hours. The Yeomen Warders of Her Majesty’s Royal Palace and Members of the Sovereign’s Body Guard of the Yeoman Guard popularly known as the Beefeaters, are ceremonial guardians of the Tower of London.

After an awesome tour, we meet up with Mark and Raelene. They did not join us until dinner because they took a trainline north to Manchester so that Raelene could get tattooed by Zooki, an artist she had been following for some time.

We met back up at a pub very close to our lodging for some traditional British fish and chips at The Cambridge – Seasonal Cask Ales.  One thing you’ll notice in these pubs no-one will come over to serve you, there are no waiters serving drinks or chips in British pubs

Strike a pose with Big Ben

The next day the 4 of us set off exploring London and take the London Underground over to Camden Town which is in northwest London in the county of Middlesex.

On our walk to the tube, we passed the One Horse Guard which was established in the mid-18th century, literally a solo guard sitting on horse tucked into a designated archway of a building. It still functions today as a gatehouse giving access between Whitehall and St James’s Park via gates on the ground floor. The first Horse Guards building was commissioned by King Charles II in 1663. We then continued walking onto to The National Gallery. The National Gallery is located in a large common area filled with tourists and street performers called Trafalgar Square.

We then rounded the corner and stood in awe of Big Ben slightly off in the distance. It was picture time, and this was a hilarious moment! James and Mark proceeded to do some phallic poses with Big Ben in the background. The funniest part was as the two grown men wrapped up their photo shoot, I then witnessed a little boy (age 7 or 8 years), who had been watching James and Mark, astonish his parents as they stared in horror while he struck the same poses!!! 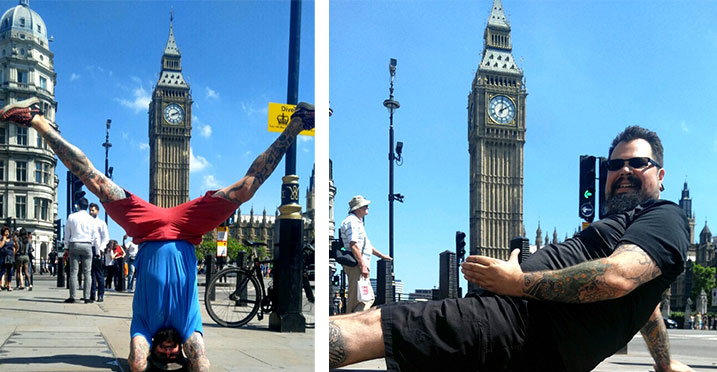 We then hopped onto the tube to Camden Town! Do not be nervous about taking the Tube in London. There is hired help standing in front of the maps there to assist you with your journey. Camden Town is an eclectic maze consisting of markets, mini food carts, pubs and live music venues. Camden Town has been a residential area since the 1790s. But it was only the development of the Grand Union Canal and the improved railway transport that turned it into a bustling, alternative living part of London.

We wound our way through the artists kiosks that stretched back into the distance and stopped at pubs sprinkled along the way. If you plan to visit Camden Town markets get there early because the shops close down at 6pm. I fell in love with one store which is called Cyberdog There are three floors packed with rave and trance clothing and accessories everything you need for your next rave. Cyberdog in Camden Market has a great history too because between 1976 and 1979 it was being used by Punk band The Clash as a living and rehearsal space. You’ll know when you get to Cyberdog because you will see two, silver, futurist guard statues, two stories high on each side of the entrance. 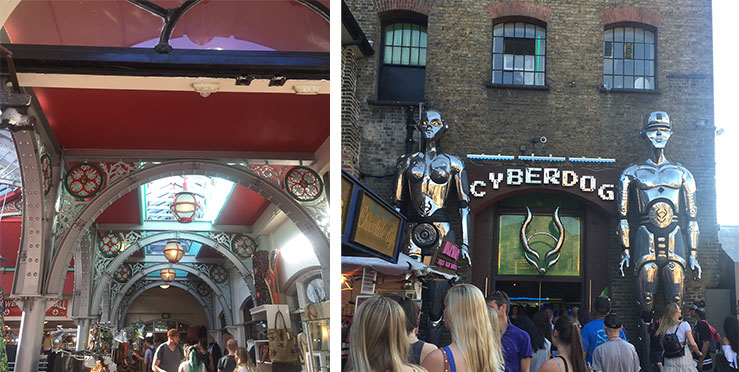 While we were in Camden Town we realized we were only a 12 minute taxi ride to the iconic Abbey Road! Abbey Road is the eleventh studio album by the Beatles, released on 26 September 1969. The cover very famously pictures the band walking across the street on a now very famous crosswalk. There are quite a few people waiting for the perfect Instagram photo but in my opinion James and Mark nailed it yet again. Internet broken..lol!

Pretty exhausted we made our way back to our central London lodging and choose a dinner location next to our lodging called Chick & Sours. A very hip Rustic-chic eatery specializing in fried chicken along with local beers, sour cocktails & ice cream.

With the weather still gorgeous displaying a shining sun with no rain or fog in sight by London standards it was convention time! Saturday and Sunday we took an Uber to Alexandra Palace Way to attend Skin Deep Magazine’s Great British Tattoo Show.  James and I had met editor and convention organizer Sion while attending a tattoo convention in Florence (blog coming soon) and of course I kept in touch. Alexandra Palace Way is in Borough of Haringey and about a 20 minute taxi ride from Central London.

We entered the glass atrium of Alexandra Palace Way built in 1863 which offered great views of London looking past the sprawling lawns on top of a big hill. There were about 300 tattoo artists, fire breathing entertainers on the main stage along with skull adorned fashion shows and some unique vendors. Saturday was a little slow but by Sunday we quickly realized soon that if the weather is sunny in London and there is a food festival happening on the outside portion of the Alexandra Palace Way the Brits will not come inside to get tattoo.  It is just too rare of an occasion for them to be outside, enjoying the sun plus dancing and day clubbing to DJ’s, music and food … so we joined them!!!!

I finally had my first classic Pimm’s! The gin based drink that has become the quintessential British summertime drink.  We partied in the sun with some very happy Brit’s until about sunset and made our way back to our last evening abroad. Completely tuckered out we all crashed to be ready to depart early for our morning flights. Sadly, our 2 week EuroTrip was ending! We all went home with fond memories, new friendship bonds and exhausted from exploring and laughing so much.  At some point after being home I’m sure we all watched the movie EuroTrip which we referenced quite often experiencing some quirky moments as well. Plus to continue to feel  the fun we had through Europe & UK as well.

To all the organizers and artists, thank you again for trusting me in putting together these trips! I appreciate your acceptance and trust.